Henry Ford built many types and models, of “vehicles” utilizing his imagination and engineering ideas for the common mans transportation. When his business expanded into Canada, it was to support the need for the new FORD CANADA COMPANY to expand its distribution network. At one point the “new” Model ‘T’ was being overcome by the growing demand from the excited public.  The Walkerville plant wasn’t able to support the manpower needed to meet the growing demand. It was time to expand the increased production assembly to “assembly plants” around the globe. To aid in that need, new plans were drawn up and key cities across the British Commonwealth and abroad were scouted out for preferred building sites. Between Dearborn and Walkerville, the Model ‘T’ and later the Model ‘A’ were available to a new worldwide market.

Montreal, Toronto, Winnipeg and Vancouver were picked as Canada’s assembly plant centres to accommodate the major cities and the rest of the provinces. Due to Ford Canada being under the British Crown, at that time, it was their duty to build vehicles for the global market. That market included the British colonies (India, Australia, New Zealand, etc. with RH drive models.)

The Toronto ‘T’ plant was “copied” in various sizes, keeping to a standard configuration of windows, facades and roof line. This allowed for each building to fit the land, the expected product volumes and sales loads from the four Canadian centres. Some of the plants may have included a sales/show room in the front foyer.

Ford’s changeover, from the Model ‘T’ to the Model ‘A’ required a bigger facility with better rail and road access to the dealers across the city and provinces. That’s when the Danforth & Victoria Park area was chosen for it’s prime location to the GT Railway and Highway 2 (Kingston Road). It also had the Danforth Road artery that ran streetcar tracks out to accommodate the hundreds of workers that lived along this broad street. The ‘A’ plant ran until late 1931 when talks of a new body style would be coming out in 1932, and more important, the Walkerville plant had finished their new assembly line/plant to accommodate all future vehicle productions for the whole country.

Fords Canadian assembly plants were sold off, the equipment was included or salvaged for the main plants usage. Eventually, they became the walls that held up and coming business’ or they were demolished to allow new development to take over. All that’s left are the odd photo’s in archives or old newspapers and books. I have pictures that show the insides of the Danforth plant before the walls and ceilings were hidden behind false ceiling tiles and painted drywall. You can still see where the tall outside windows were placed to bring in the natural light for the workers to see by. Hot air and fumes escaped through the long ceiling vent windows that stuck up like saw teeth into the blue sky. All that’s left are the marks, impressions and thoughts of what was it like to work in a big building like this, putting together a vehicle that stands the test of time. 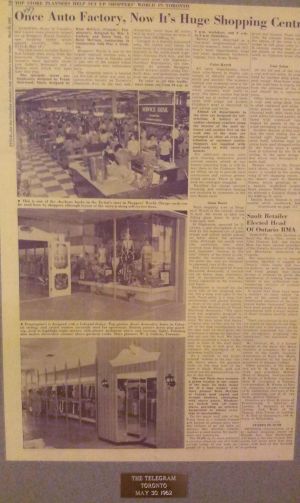 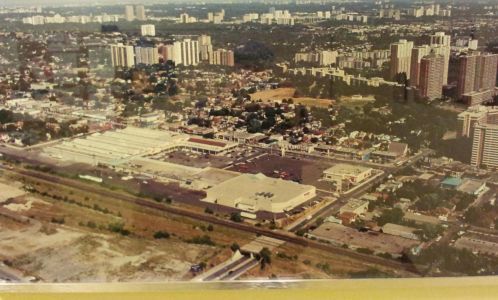 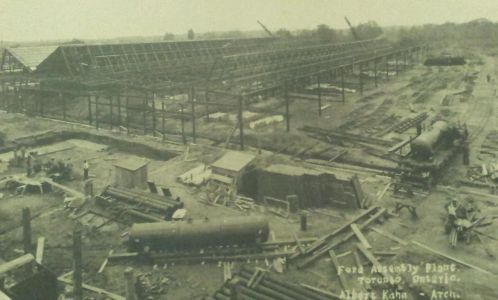 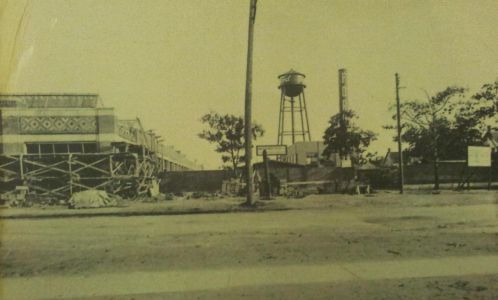 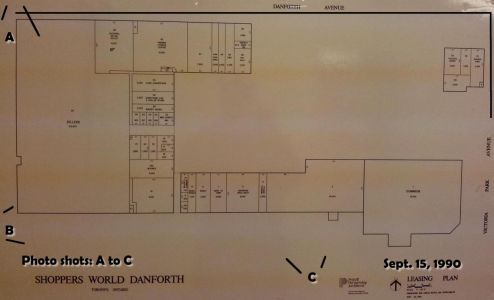 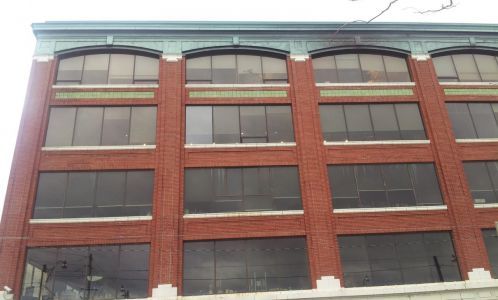 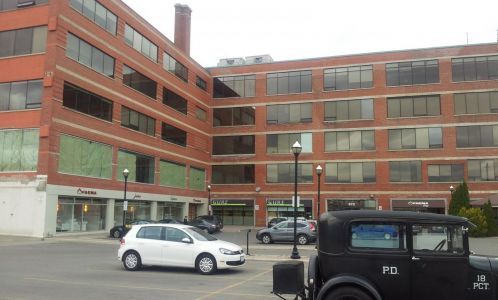 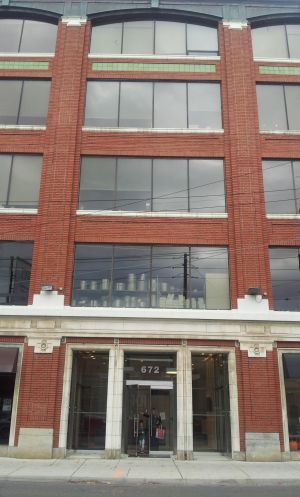 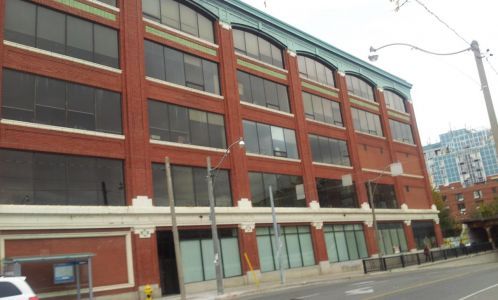 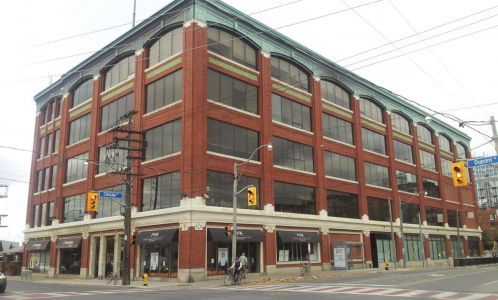 Today it’s an open loft condo building with shops on the main floor.

Photo – 6 – 1990 blueprints of the Shoppers World Plaza, the first covered mall in the east end of Toronto. The Zellers store is situated where the Model ‘A’ assembly line may have run around the building to accommodate the process. Unfortunately there isn’t any known documentation as to the exact layout of the conveyor systems or sub-assembly lines that were included in the process.

Photo – 7- (A) North-west corner, of the plant, showing the graphic stone work in the front facade. This west area will become the employees parking lot. Notice the FORD water tower in the photo. It supplied the water needs, of the factory, for steam power, boilers and fire  suppression systems.

Photo – 8 – (B) Looking north-east, from the water tower. Two steam boilers are being jockeyed into position for unloading. The steam framework is 50% in the air with the rest lying in wait to the south of the newly installed steelworks. Notice in the background the field is still bare which raises the question, did Ford build the factory to include that extra space.

Photo – 9 – (C) North-west aerial view over the CN/CP rail lines and Victoria Park Ave. The Zellers company has taken over the western part of the Mall that used to be shared with Eaton’s. Shoppers World was home to the new Shoppers Drug Mart, whence the name’s similarity. The year of this photo could be the same as the 1990 blueprints, for the benefit of the Malls owners. Today a Loblaws store is sitting in that bare field, south of the tracks, west side of Victoria Park.

When more photos and information is found, this page will grow and so will the interest in the  Canadian Model ‘A’ Ford history.

IF you find any discrepancies or statements that don’t quit fit, let me know via the contacts page. This is an open document, waiting for the truth of what happened to the old assembly plants years ago.